The Government of Pakistan has been accused of allocating very little budget on healthcare. The countries’ population is too high to depend on only 2% of the national GDP for healthcare across the country. Poverty is on the rise as the cost of living is also increasing every year putting families in danger of succumbing to some of the country’s top 10 health issues. Therefore, it is important for the Government and Nongovernmental organizations to come together and rescue the population from the health issues that Pakistan faces. So which are some of the health issues that deserve better attention? Continue reading to find out the top 10 health issues in Pakistan. List of Top 10 Health Issues in Pakistan

The world health day in 2017 focused on Depression as one of the health issues affecting many countries including Pakistan. Pakistan Psychiatric Society revealed that out of three people in Pakistan, one of them is suffering from stress and depression related anxiety. Also, the news reported by Express Tribune indicates that 44% of the Pakistan population is affected by depression. This leads to mental health issues that affect the productivity of the patients at work and in school in cases of students. A disturbing issue is that there are only 750 trained psychiatrists which means that only one is available to serve about 10,000 patients. This alarming health issue should be addressed as soon as possible.

In Pakistan, the prevalence of Hypertension among people aged 50 years and above is at 50%. If patients don’t seek early treatment, then there is a high likelihood that this will lead to cerebral hemorrhage, possible heart failure, stroke and blindness in some cases. Unfortunately, there are no symptoms linked to this health issue and therefore it is classified as silent killer among people. It is important for Pakistanis to go for early screening so as to seek medical attention that will reduce the effects of hypertension.

This is a common viral infection in Pakistan which is categorized under the top 10 health problems the country faces. The disease affects mostly the children who are under the age of five years. This is because they have a weak immune system and spreads mostly through saliva, skin to skin contact and coming into contact with the infected surface. 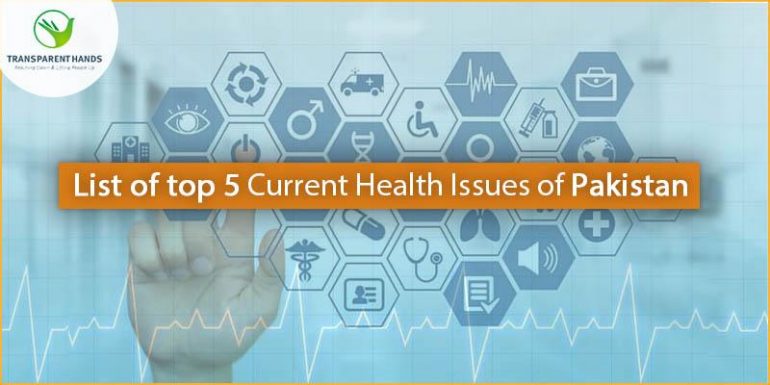 This is a common health issue in Pakistan that mostly affects the disadvantaged majority living in poverty and can`t afford to pay for treatment ; leave alone good sanitary conditions. Malaria spreads easily through mosquito bites after these mosquitoes breed in areas with stagnant dirty water.

Statistics from national government bodies indicate that 12 million people are infected with hepatitis B or C. The two are a major epidemic and spreads through sharing infected needles in medical care and also among drug abusing Pakistanis.

This is another national health problem in Pakistan that is highly infectious and spread through mosquito bites. When a mosquito feeds on the blood of an infected person, it spreads the virus to another person through a bite. High cases of new infection of Dengue fever are reported over the monsoon season due to increase in mosquitoes as a result of flooding.

Poor sanitary conditions in slums and several rural areas lead to spread of Cholera in Pakistan. The Cholera causing bacteria affect the small intestines when people feed on infected food. The poor sanitary conditions are to blame for the widespread of Cholera especially in the slums where the living conditions are worse. Access to clean drinking water is also a major reason why this is one of the top 10 health problems in Pakistan.

Pakistan is listed among the heavily TB burdened countries worldwide with a very high prevalence of the multidrug-resistant TB. The Federal Government together with WHO have initiated several projects in different parts of Pakistan that aims at curbing the high spread of the endemic. This includes educative forums and ensuring hospitals are well equipped and staffed to be able to manage this serious health problem in Pakistan.

There are many different cancer types reported in Pakistan. Cancer is a worldwide health issue. In Pakistan, several cancer patients are not able to afford the cancer treatment cost owing to the high poverty levels in the country.  Therefore, the government should be in the forefront to initiate free treatment for cancer patients to stop the death rates as a result of cancer.

This is a health issue in Pakistan that does not know the poor or the rich. It affects a large number of people mostly due to the lifestyle of people which makes them vulnerable to heart diseases. People should be educated more on the major risks that can lead to heart diseases.

These are the common top 10 health issues in Pakistan as per the recent analysis conducted by various bodies with interest in improving the health status of Pakistanis. The Government and NGO`s should support initiatives that aim at eradicating these health issues.

Munazza Bibi is facing acute abdomen pain and needs to u...

Muhammad Shan was born with deadly heart disease. We req...

Basheeran has renal stones in her left kidney, causing h...