What Transparent Hands is Thankful for This Year!

How we choose to wake up in the morning is important. A new morning gives us one more day to live and to breathe for one more precious day. Every morning we are to make choices and these choices define our lives as a whole.

A few like-minded people realized this. They chose life to feel the freedom which only comes when you allow the freedom of living to others. They chose to feel life by embracing humanity that has led to the formation of non-profit, charitable and welfare organizations in our society,  Working hard to promote the smile of a child, to promote the love of a mother,  to promote the  joy of a father and bless, the togetherness of a family as when they were drowning in disease, hunger, poverty  or were homeless  and had nobody to rescue or uplift them.

What Transparent Hands Does:

Transparent Hands is a nonprofit organization formed to reach millions of needy patients all over Pakistan who are suffering because of lack of surgical treatment. More than 70 million people in Pakistan are living below the poverty line due to which they are unable to undergo proper health treatment if they acquire any disease. 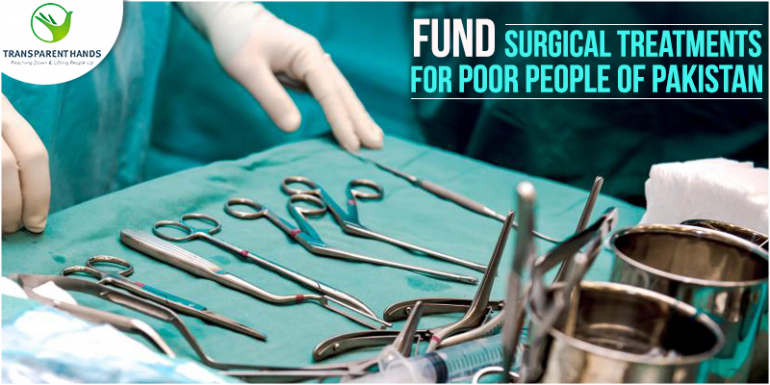 According to the report of Lasallian Foundations, one in every three Pakistanis lives below the poverty line. Of this 74 % live on less than $2 USD and 17% live on less than $1.25 USD per day. Malnutrition is another major health concern in Pakistan with almost 40% of all children under the age 5 are underweight. According to Asian Development Bank, for every 1000 babies born in Pakistan, 66 die before the first birthday.

Transparent Hands aims to expand in Pakistan where the poverty-stricken community has no means of getting better healthcare facilities. Transparent Hands ensure to provide the best surgical treatment to them free of cost and also pay for post operating expense which includes medical tests, medications, hospital stay and other expenses. Here all the patients are treated with care and love.

A large number of people who came to Transparent Hands on the hope of relief were treated according to their needs with the help of fundraising. This year Transparent Hands treated and helped around 100 patients who had undergone General surgeries including  Gallbladder, Orthopedic surgeries, Gynecology surgeries, Heart surgeries of children and Cancer surgeries.

With the fundraising from the donors, Transparent Hands contributed to the surgeries of these poor patients and brought them back to better health and improved their living. We at  Transparent Hands are trying our best to provide the best surgical treatment to the maximum number of deserving patients who are suffering from various diseases. Our team and medical partners use their skills and expertise to provide great healthcare facilities to our patients.

It’s been a humble pleasure and honor for us at Transparent Hands as we have managed to create a lasting impact on numerous lives of all ages including men, women, children and elderly alike. Transparent Hands service team in collaboration with partner hospitals are providing immense support and care to the people in need.

Zeeshan Ahmed 11/2 years old boy presented with cyanotic heart disease. When he came to us he was diagnosed to have congenital Cardiac Defect (involving Transposition of great arteries-TGA, Interventricular septum-IVS, Atrial septal defect-ASD, regressed Lt. Ventricle). He was advised surgery to correct the defect and relieve cyanosis. His surgery was done at Ittefaq Hospital in June by Dr. M.Asim Khan. His atrial switch sending was done. He had good post-op recovery and remained admitted for 4 days. He was discharged in good health.

Amna Khalil 36 years old lady was diagnosed with recurrent Lt Ovarian Cyst. She was operated twice for the same at the local hospital but it was not helpful. She was advised laparotomy and removal of her ovarian cyst. Her surgery was done in Akram Medical Complex by Dr. Asia Nasir on May and the multiloculated cyst was removed. She recovered well postoperatively in two days stay and was discharged in good health.

Muhammad Yaseen 50 years of age was suffering from lower urinary tract symptoms due to bladder outlet obstruction. He was diagnosed to have Benign Prostatic Hyperplasia and advised Transurethral resection of the prostate. His surgery was done in June in Akram Medical Complex by Dr. Athar Mehmood. He remained admitted for three days and had a good postoperative recovery. He was discharged symptom-free.

Ali Kashif 15 months old child had breathing difficulty and cyanosis since birth. He was diagnosed with Tetralogy of Fallot. He was advised open heart surgery for corrective repair. His surgery was done at Ittefaq Hospital in May by Dr. Salman A Shah and Total Correction was done. He had a good postoperative recovery in ICU and later inward from where he was discharged in stable condition.

Next year goals of Transparent Hands:

The high standards of transparency level at our organization makes us unique. We at Transparent Hands ensure donors that each penny they are giving will be spent on the needy patient. The donor can see that the exact amount hospital has charged against the surgery of that particular patient.  So Donors can completely put their trust in us regarding their donations and charity being spent for the right cause.

Now that 2018 is knocking at the door we have set a sacred mission before us. Next year we’re committed to conducting a total of 250 surgeries, including  185 General surgeries, 60 Heart surgeries, and 5 Cancer surgeries.

We at Transparent hands have always assisted people suffering from life-threatening diseases so that they can rise from their pain and can live in better situations. Our organization is devoted to act and stand for people immobilized by illness and gravity of loss with the help of generous donors. 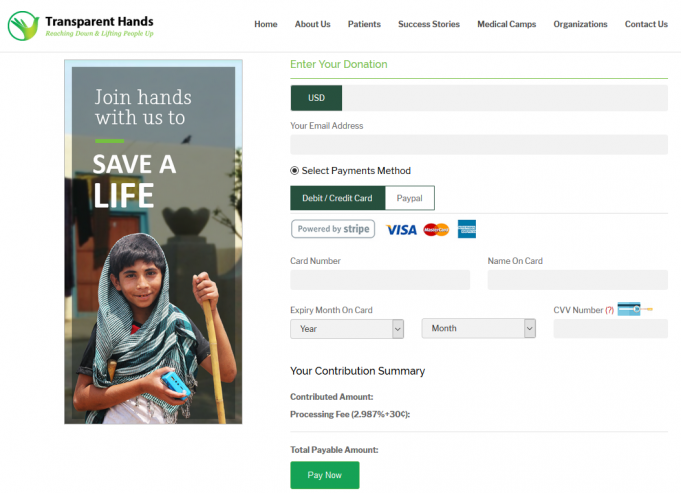 The pursuit of human life is to serve and to show compassion and the will to help others. Donating even the insignificant amounts can lead to bigger changes when everyone is doing the same and supporting a single cause.  Fund the surgical patients at our organization so that we can help them rise above insecurity and unhealthy circumstances.

Share a chunk of your wealth with these unfortunate people who can’t bear the expenses of the surgical treatments and bless them a life that holds prosperity and right to live in this world. Thousands of candles can be lighted from a single candle, and the life of the candle will not be shortened. Happiness never decreases when shared.